Fighting for whale and dolphin protection is rarely as glamorous as it might sound. Much of it takes place in long meetings, where evidence is presented and decisions are made. Some of the most important events in a whale conservationist’s calendar are the various meetings of the International Whaling Commission, or IWC, the body that regulates whaling. The IWC is made up of delegates from the 88 countries that are members of the IWC. Non-governmental organisations (NGOs) like WDC participate in these meetings, acting as advisors to government officials, lobbying delegates to use their votes in favour of whales and presenting evidence to support welfare, conservation and protection measures.>

WDC sits on the IWC’s Scientific Committee and I was privileged to represent you, WDC and the whales at a meeting of the Scientific Committee earlier this year, in the beautiful city of Bled, Slovenia. National government delegates and scientists from all over the world gathered to discuss whales and dolphins. I was there on behalf of WDC participating in debates, talking to key individuals to try to influence change and providing scientific expertise on a number of different subjects. 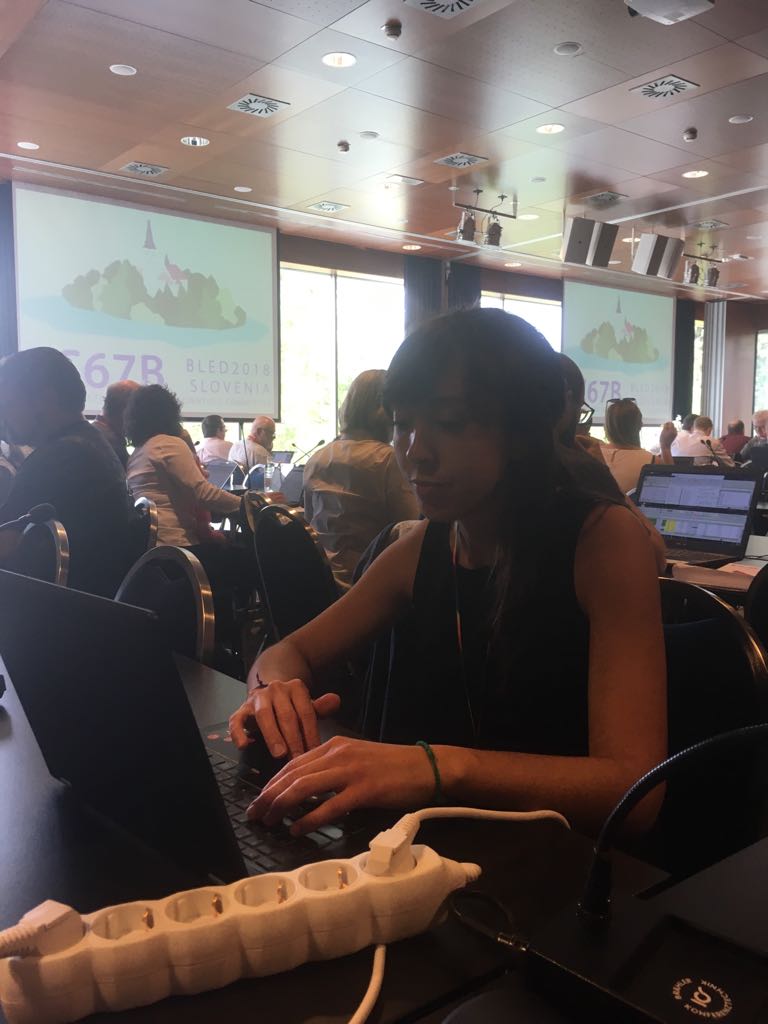 I thought I’d tell you a bit about the meeting, as this is the side of whale conservation that few people get to see. It’s an extremely important part of what we do as huge decisions are made in these meetings which have a lasting impact for whales.

As I expected, there was confrontation around Japan’s controversial whale hunting. The Japanese government sanctions two whale hunts – one within the Southern Ocean Sanctuary in Antarctica, supposedly a protected region, and the other in coastal waters off the western North Pacific. Japan carries out these hunts by exploiting a loophole in the IWC’s ban on commercial whaling, which allows some whaling for scientific research purposes.

Japan’s so-called ‘scientific whaling’ has been heavily criticised by expert scientists at the International Court of Justice, the European Union Parliament and the International Union for Conservation of Nature (IUCN). We talked about this at the meeting and most of the Scientific Committee members and invited participants support these criticisms agreeing that there is absolutely no need for whales to be killed to research any aspect of their lives! There are so many other ways to study whales and new methods and techniques are being developed all the time. The scientific community is in agreement that there is no scientific justification whatsoever for killing whales, yet Japan argued that data can be obtained much more quickly and reliably by killing a whale than by using other methods.

I’ve been working with The Southern Ocean Research Partnership since 2014 and we are using visual and acoustic methods to study whales In the Antarctic. During the Antarctic cruises, we take note of every single whale we see, using binoculars from the bridge, and every whale we hear, using an array of hydrophones towed behind our vessel. We have also deployed an acoustic recorder (pictured below) down to a depth of 1,000 metres, which allow us to monitor the presence of whales all year round, through their sounds.

Scientists from 13 countries have been conducting high quality research in Antarctica through non-lethal methods – living proof that we can study whales in Antarctica without killing them. 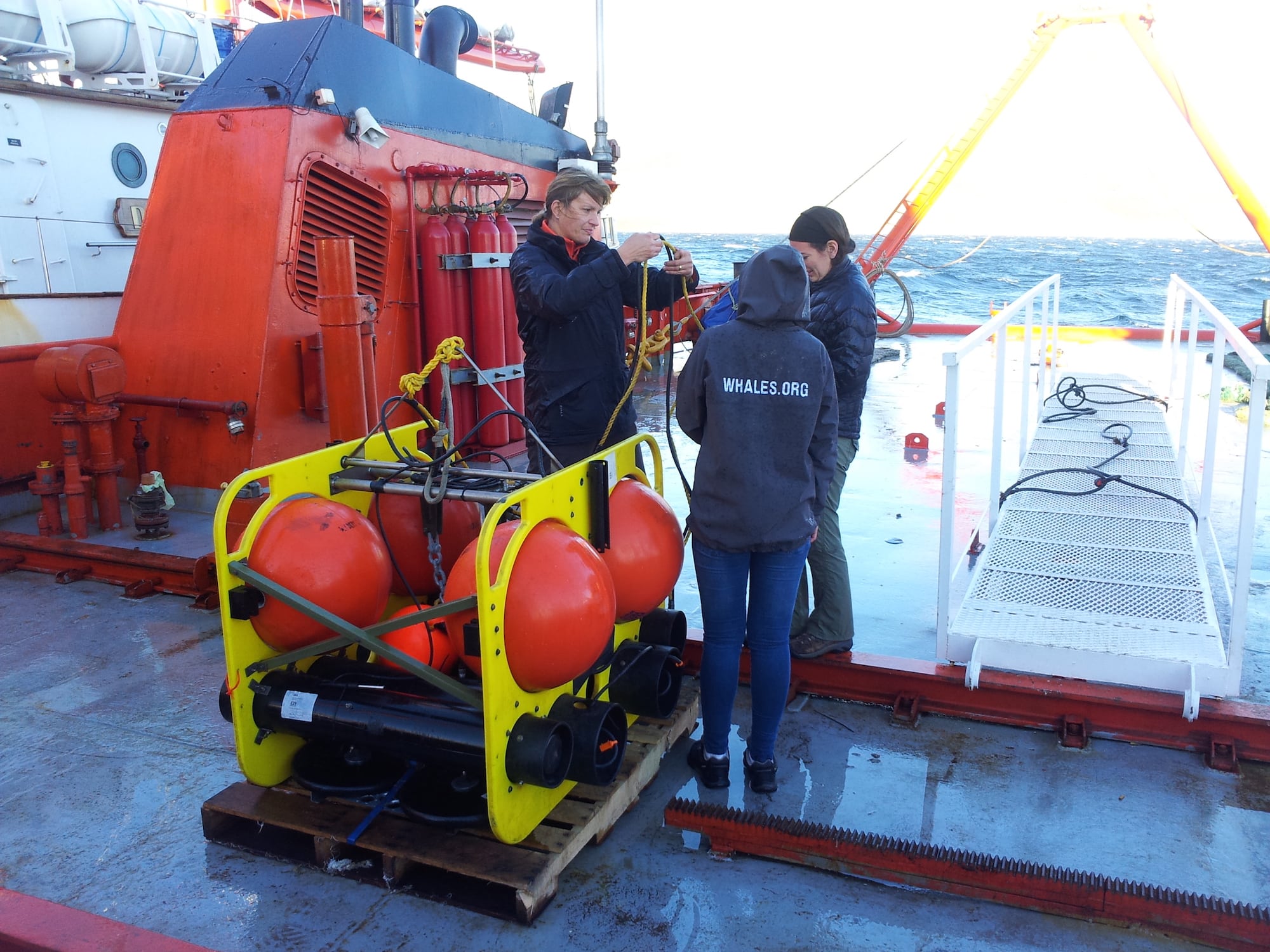 Save the whales, save the planet

We use these international meetings, like the IWC, to highlight the environmental impacts of killing whales. We’re determined to get governments to understand that they need to consider this when making decisions about whaling. It’s not just about whether or not whale populations can survive a certain number of deaths, we also need to take into account the impact these deaths will have on marine ecosystems and the environment as a whole. Whales play a vital role in maintaining healthy oceans. They recycle nutrients which feed the phytoplankton which produce half the oxygen we breathe. Think about that – whales are responsible for every other breath you take! Whales are also allies in our fight against climate change. When a whale carcass sinks to the bottom of the ocean, it isolates a large amount of carbon and creates unique habitats in the deep.

The delegates from Japan’s government disagreed, well they would wouldn’t they. But a majority of participants agreed to hold a workshop to define objectives and identify what further research is required in order to begin modelling the contribution of whales to our ecosystem. The outcomes of this workshop will be presented and discussed at the next meeting and will hopefully be the start of a new way of thinking about whaling and conservation. 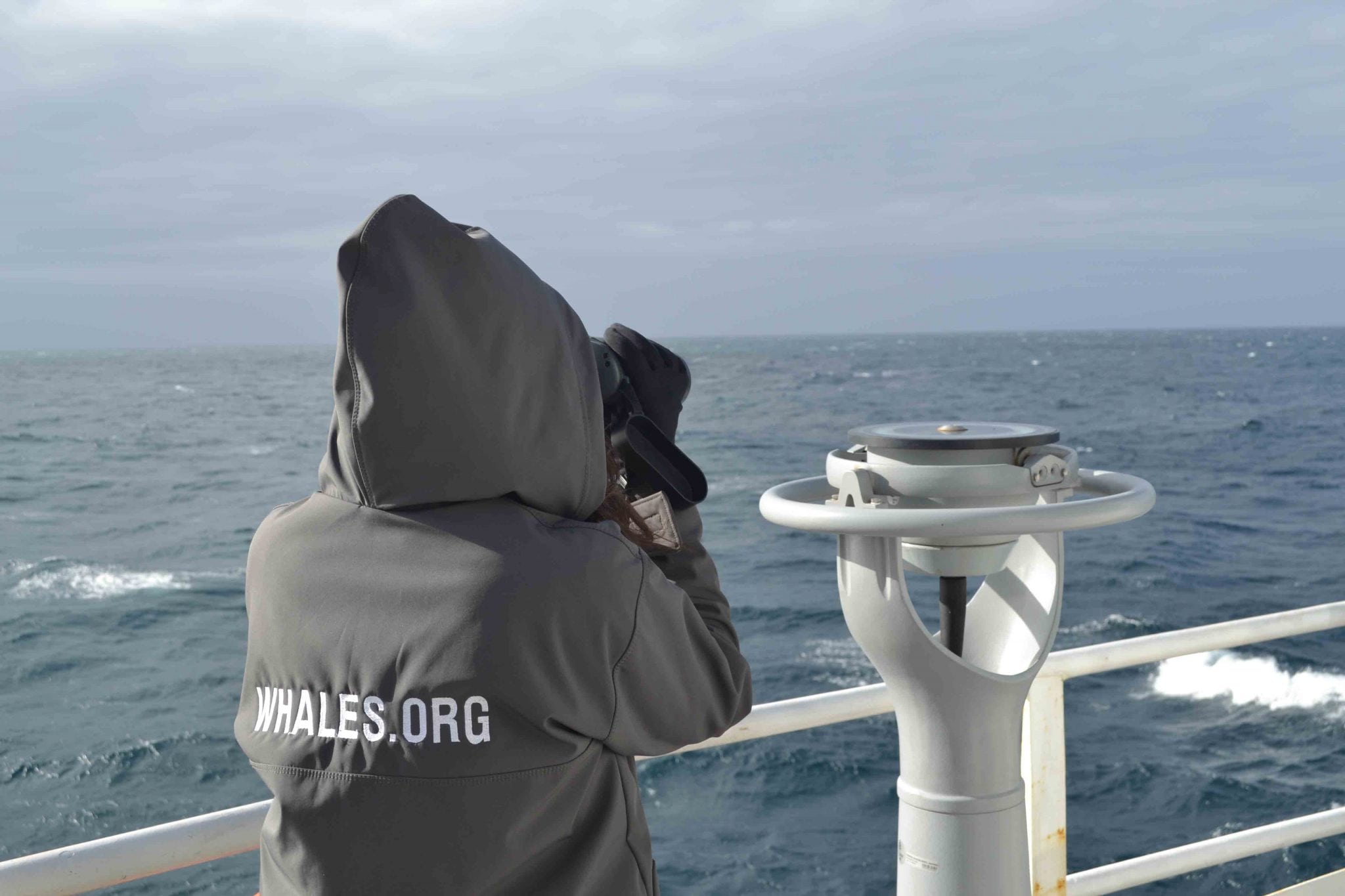 The IWC also looks at issues around entanglement in fishing gear, or bycatch. This bycatch is the single biggest killer of whales and dolphins globally. WDC is also contributing to what’s rather grandly called, ‘the IWC Bycatch Mitigation Initiative (BMI)’. This is a strategic assessment to look at this problem on a global scale, rather than just relying on each country to sort out its own fisheries issues.

We are working to identify the priority actions needed for tackling bycatch in a coordinated and collaborative way. Then we’ll need to identify priority fisheries, areas, species and/or populations to be considered for pilot projects, review available mitigation measures, provide technical assistance for development of monitoring programmes, identify fishing efforts and assess bycatch risk.

At this meeting, the Scientific Committee expressed serious concern over the high numbers of dolphins and porpoises dying in nets in Peru, especially Burmeister’s porpoises and dusky dolphins, and this was identified as a possible pilot project for the BMI. If we can successfully implement it, our hope is that we can prevent Burmeister’s porpoises from facing the same fate as the closely related vaquitas in the northern Gulf of California. Vaquitas face extinction because of failure to get to grips with and eliminate bycatch.

Focus on endangered species and populations

Many of the projects and programmes that WDC is involved with got the international scientific support of the IWC Scientific Committee. We are working on conservation programmes to protect the South West Atlantic southern right whales and franciscanas (the most endangered dolphins in the SW Atlantic Ocean) and it was agreed that an assessment should be made of the status of the franciscana to determine effectiveness of conservation efforts.

We discussed so many issues needing urgent attention, including the river and estuarine dolphins of South America. The IWC Scientific Committee expressed serious concern about the status of these dolphins who face a whole raft of threats including habitat destruction and fragmentation, bycatch, and being killed for use as bait to catch a fish called piracatinga.

The Committee also expressed conservation concerns for bottlenose dolphins in Argentina, Brazil and Uruguay, given the small population sizes, constricted ranges, high levels of bycatch, and the high incidence of individuals with chronic skin diseases associated with fungal infections, in the South of Brazil. WDC supports the work of our Argentine partner Fundación Cethus who run conservation projects to protect bottlenose dolphins off Northern Patagonia. 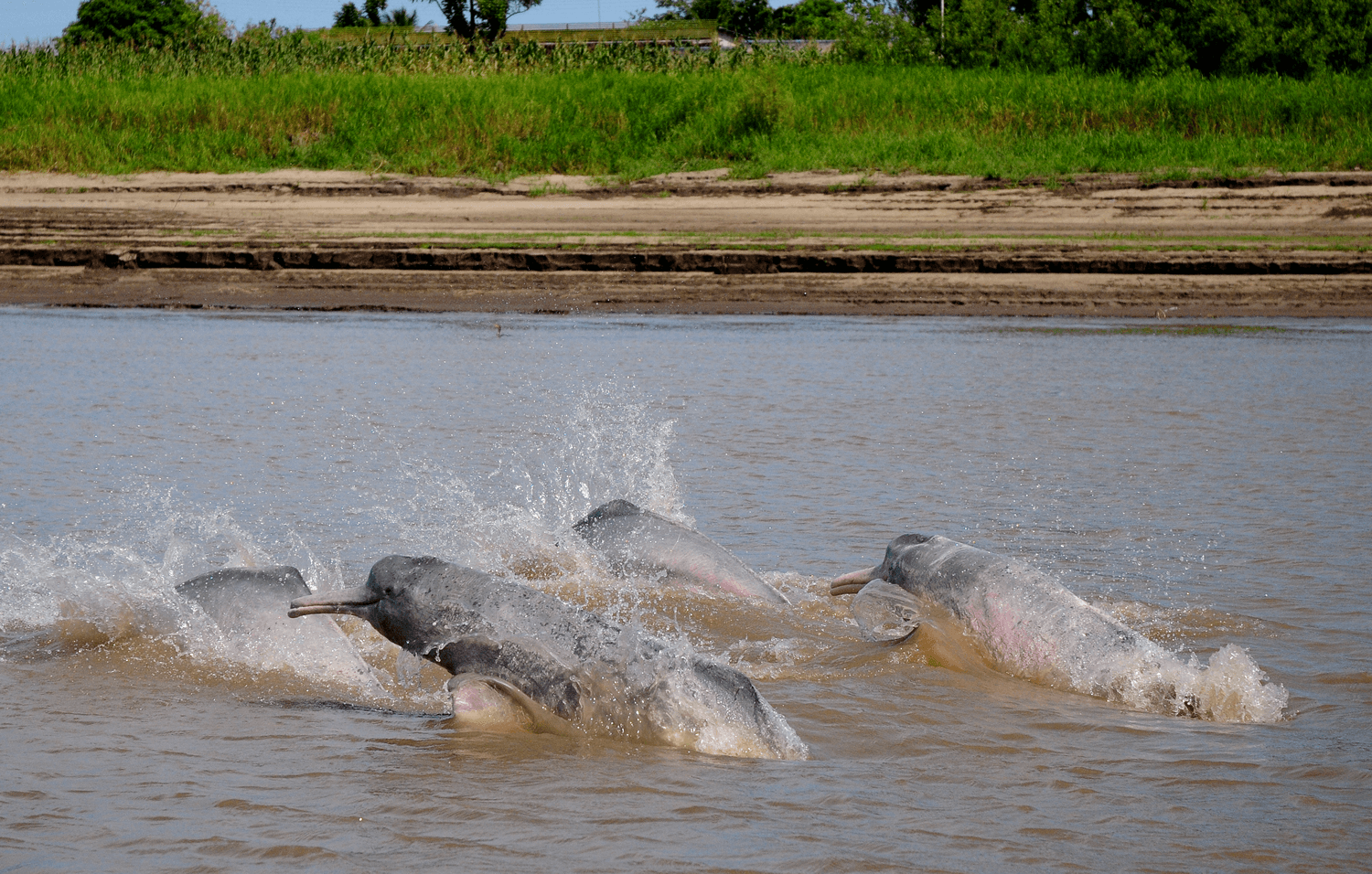 The IWC Scientific Committee also provides advice to the main IWC body when it comes to what’s known as ‘aboriginal subsistence whaling’ – this term covers the hunts that are sanctioned by the IWC for a small number of indigenous peoples to meet cultural and nutritional needs.

In addition to all this, many other discussions took place over the long sessions. We talked about whale watching, ship strikes, climate change, marine debris, ocean noise and much more.

For the next few months we will be busy preparing for the IWC meeting in September. These meetings of the whole Commission happen every two years with all the sub committees beavering away in between. It’s at these biannual meetings that all the government representatives gather and the big decisions are taken, based on the evidence and recommendations of the sub-groups like the Scientific Committee.

I hope I’ve given you a bit of an insight into the life of a whale conservationist. A lot of what I and my colleagues in WDC and other organisations do is about preparing for these important international meetings where the future of whales and dolphins is mapped out and decided. It’s behind closed doors and at desks and it’s not what you might think of as exciting. But it is certainly crucial, and it’s these quiet efforts that have kept the whaling ban in place for so many decades and will hopefully one day create a world where every whale and dolphin is safe and free.

If you are a WDC supporter then it’s thanks to you that we are able to get to these meetings – you fund all of this and I want to say a personal ‘thank you’.

If you’d like to make a donation, we’d be very grateful.